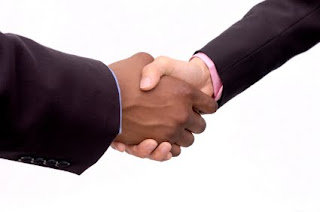 A few months ago a colleague of mine realized that his client relationship was deteriorating. Response times dropped and the work being produced slipped further and further below acceptable standards. Our firm was keen to repair the damage and while we brainstormed possible solutions it hit me that our perception of the quality of the relationship was directly correlated to the quality of their output. Imagine the two variables are plotted along two axes.

The fact that these two dimensions are so tightly correlated should not come as a surprise. Everybody has experienced a bad working relationship where interaction with a client, supplier or colleague becomes difficult precisely because you have come to perceive the relationship as being a bad one. It may be that your colleague was free riding or your client behaved inappropriately or it may be that a supplier did something to lose your trust. In the end the result is the same: neither party wants to work with one another, work suffers and a downward spiral results. If left to persist, it becomes harder and harder to repair relations.

Our solution to the problem was to distinguish between the client relationship and the output of that relationship. We identified the tasks that needed to be completed and advised they resolve to complete them efficiently. While relations continued to be strained, they were able to increase their productivity by ignoring behaviour that they had previously found irksome.

By making this switch they were able to effectively get through what was needed. While this approach was effective as a short-term fix, however, it did not address the fundamental issue: the relationship was still broken. They were faced with a choice – investing in salvaging the relationship or cutting our losses and moving on. Anyone in a similar situation must weigh up several factors:

Taking an instrumental approach is important in defining what you have to win or lose based on the choice you make, both as a business and as an individual. It also helps by setting a clear and justifiable objective to pursue in your future dealings with the other party. While each situation is different, there are a few guidelines that can be helpful when attempting to resolve such a situation:

1. Organise a face-to-face meeting with the client, supplier or colleague. Make it clear in advance that the relationship is not working and that this is an opportunity to review it. Set an agenda and let both parties contribute to it
2. Review the things in the relationship that you found unacceptable and outline areas where you are prepared to compromise and areas where you are not. You should work to set the parameters around your zone of possible agreement, to borrow a negotiations term
3. When discussing what went wrong, be very clear about the behaviour that you found unacceptable. Be descriptive and try not to make it personal
4. Listen to the perspective of the other side and attempt to identify implicitly or explicitly the underlying drivers of their behaviour and the triggers for effective and ineffective performance
5. Be accountable for the mistakes you made through the process and resolve to correct them
6. Come to an agreement on common goals and acceptable modes of behaviour.

Honest, effective communication is the only way to effectively rebalance a relationship in the long term. The influential American physicist David Bohm liked to distinguish between discussion – one-sided, loud and percussive – and dialogue – a conversation borne of mutual understanding. Some relationships are worth saving and being prepared to engage with candour, humility and empathy is the best place to start.