on May 12, 2013
by Penny Lin, Associate at Amoo, and Saurabh Saxena, Senior Associate (edited by Godman Usman, Analyst)


VC View
Venture Capital and Private Equity investments (excluding buyouts) in the UK clean energy sector totalled $623 million in 2011, a 3% increase on the $605 million recorded in 2010. Despite this modest increase, the number of deals completed actually fell 28% year-on-year to 60. This trend continued in the beginning of 2012 – 12 deals totalling $229 million were executed in Q1:2012, compared with a quarterly average of 15 completed deals totalling $155 million recorded in 2011. (Source: http://www.cleanenergypipeline.com/download/UnitedKingdomGreenInvestmentGuide2012.pdf ). This not only reflects the maturing of the sector, but also a shift in investor appetite away from early-stage, unproven technology companies to less risky late-stage businesses. Read on.

Many ‘inventors’ are focussed exclusively on the technology (whether it’s a new kind of wind turbine, or an app to help car sharing). Investors expect in-depth knowledge of competitors’ products and pricing strategies, in addition to the economics and policy drivers affecting the business. For example, with reference to renewable energy, government subsidies are under pressure from strained public finances, consequently, investors are particularly wary of businesses reliant on feed-in tariffs and or other incentives. Venture Capital firms that funded the first group of European clean energy technology companies are either withdrawing from the sector entirely or moving up the value chain to support less risky, later stage technology companies.

Of course, public policy goals still exist, so businesses benefiting from positive regulation or rising polluter taxes are in favour. Best of all are business models that offer customers cost savings and hence economic returns without subsidy. 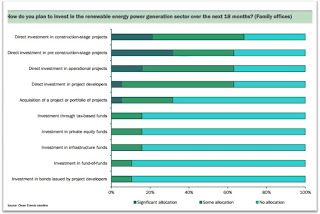 Hot sub-sectors
Energy efficiency is set to be the greatest beneficiary of private capital investors’ growing interest in the clean energy sector. A survey conducted recently, revealed, that the majority of "private capital investor respondents" intend to allocate at least some of their available funds for this particular sub-sector over the next 18 months, marginally ahead of recycling & waste and solar technology companies.

With its limited capital requirement, energy efficiency is a particularly appropriate sub-sector for angel investors and high-net worth individuals. On the generation side, biomass and solar power projects are the most favoured sub-sectors according to 48% and 45% of surveyed family offices respectively. This is in stark contrast with institutional investors’ sector preferences. The interest in solar might seem surprising given the substantial tariff cuts, but even at reduced tariff rates some private capital investors with lower return requirements than investment funds still view a fixed term (often index linked) return on capital coupled with low maintenance requirements as attractive. For others, private capital investment in solar power projects may be focussed on emerging markets where subsidy mechanisms are only just being established, such as in Central and Eastern Europe.
Amoo Venture Capital Advisory cleantech
Location: London, UK