In recent years, there has been a growing interest in sustainability, especially in the private equity and venture capital network. Sustainability by definition has multiple dimensions, namely Economic, Social and Environmental (so-called ‘Triple Bottom Line’). From an investor’s perspective, sustainability encompasses investing in technologies and ventures that allow us to optimise the use of scarce resources. Most times, these transform the way we work and live and hence why it is commonly known as “impact investing or conscious
capitalism”. As sustainability revolves around three diverse metrics, there is a broad range of ventures and actions that we can associate with the concept.

Despite the broadness of the concept, there is still a common perception that evolves around sustainability – many still tend to believe it is solely about renewable energy generation such as solar panels and wind turbines. Up until recently, there has been a big emphasis on capital-intensive clean-tech. Solar tech alongside other capital-intensive projects accounted for more than 60% of clean-tech venture deals in 2008. By 2010, this figure dropped sharply to 12%. Primarily, this decline occurred because investors initially expected substantial returns on these risky investments. Furthermore, the global financial crisis has also contributed to the decrease in demand for the risky capital-intensive investments.


As investors’ appetite and attitude towards risk changed, they swayed from the capital-intensive investments. Some turned their attention to less capital-intensive areas of clean-tech such as energy efficiency, pollution control and management and water. Others migrated back to Internet and software. In 2013, energy efficiency was the biggest focus in clean-tech amongst the VCs in the U.S.: $1.3 B was allocated in 188 deals, 23% higher than the previous year, whilst the deal flow in solar and biomass was down 20% and 42% respectively. The hype in less capital-intensive sustainable-tech is perhaps well highlighted by Google’s recent acquisition of Nest Labs.

As investors seek resource-efficient solutions, there is, and will be a sea of opportunity to arbitrage this transition and revamp markets using pre-existing technologies.

‘Non-green’ forms of conscious capitalism involve investing with intention to generate social benefits alongside financial returns - this is commonly known as Social Venture Capitalism (SVC). Acumen and Lundin’s recent joint-investment in Esoko Networks perhaps is a good illustration of SVC in action. Esoko is a mobile platform that connects African farmers to markets. The platform pushes market prices, offers, climate adaptation and agronomic advice that would allow farmers to improve both the quantity and quality of yields and thus income and living standards. It also allows related organisations such as agricultural businesses, NGOs, development financial institutions and governments to profile the agricultural community and grasp a better understanding of market forces, their needs and designate resources accordingly, alleviating potential inefficiencies.
This example shares a common trend that was aforementioned - in terms of the core technology, there is nothing new but rather, it is again a case of renovating the market using existing technologies. There is potentially a wide scope for value creation using existing ‘capital-slim’ technologies.

Another key contributor to the market’s increasing appetite for sustainability can be attributed to changes in regulations and public perception towards the private equity and venture capital industry. Ever since the global financial crisis, public perception towards the financial sector has been less than welcoming. This perception was complemented by tighter regulations. At a recent PE & VC discussion, Mark Florman, a former BVCA CEO suggested that “regulators want to scrutinise the players and control the industry”. In response, BVCA alongside a group of fund managers put the idea of ‘impact investing’ forward, highlighting issues such as job creation and social impact to shape the industry into an ‘accepted’ part of the society and the idea of sustainable investing seems as though it is more liked by the public. Such movements have indeed set a mood in the community, increasing the awareness and opening up scope for new opportunities. 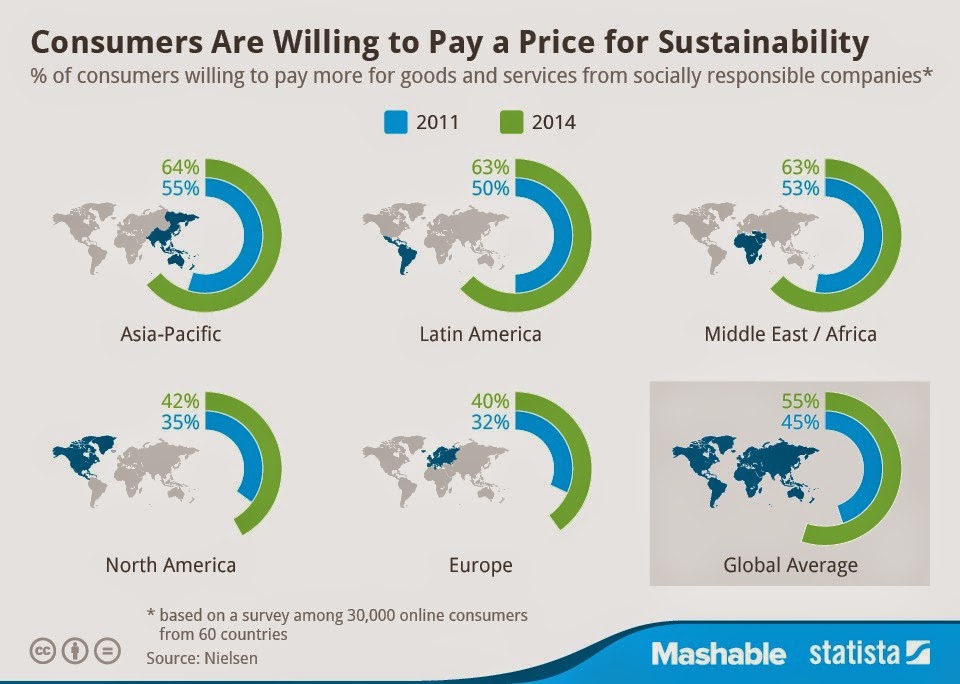 The changes in financial and regulatory landscape alongside growing social, economic and ecological challenges are forcing markets to become more aware of sustainability. This change in attitude is clearly represented by a recent consumer survey compiled by Mashable and Statista.
Considering these transitions, it seems channelling resources into sustainable projects might be a prudent solution for VCs and PEs, and indeed good opportunity for entrepreneurs.
business cleantech conscious capitalism funding impact investing Sustainable Finance Venture Capital

What are your thoughts?